Noted for: Greek philosopher from Athens 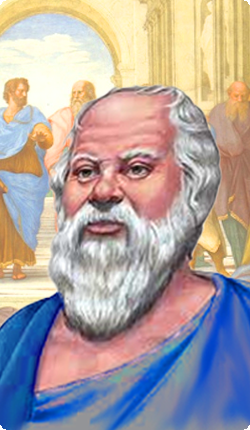 Socrates was born in Athens in 469 BC to a stonemason and a midwife. His family was not poor but they were by no means wealthy. In a culture that worshipped male beauty, Socrates had the misfortune to be born quite ugly. Socrates spent his younger days in the Athenian marketplace, asking questions of those who would speak with him. While he was poor, he acquired a following of rich young aristocrats, one of whom was Plato.

Socrates had a strange kind of piety, relying on what he called his demon, his inner voice. This demon would come to him during strange episodes when the philosopher stood still, staring for hours (now thought to be catalepsy, a nervous condition that causes muscular rigidity).

Whilst Socrates claimed no religion as such, his influence in Islamic culture is often overlooked in the Middle East and North Africa. His rejection of the citys gods resulted in his being sentenced to death by poison.