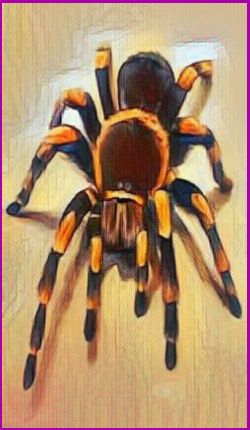 Predator: One symbolic interpretation of The Spider is a situation that is eating you alive. Occasionally it may refer to a person who is chasing you romantically or a rival in love or at work

Warning: Sometime The Spider comes as a warning though rarely as a prediction. It seeks rather to make us look at things we are ignoring or repressing and bring them into the open and deal with them.

Darkness: The Spider can represent depression or worry and often relates to a person close to us. Sometimes it can suggest dark thoughts such as jealousy or revenge. The card can be a sign of worrying unnecessarily.

Romance: The Spider can be a card about romance and relationships. It is generally an optimistic card but is best used as guidance for existing arising issues.

The Spider can signify a partner or father figure (male relative). Despite being disliked by many The Spider is a very inspiring card to get in a reading.

The Spider card represents kindness, compassion and wisdom. This minor card can indicate that you will be finding the balance between your mind and your heart. You will learn to control your emotions and find the wisdom to accept that which you cannot change. You should be gaining a deeper level of emotional maturity when this card appears. You will become calmer, more sympathetic to others and tolerant. The Spider signifies emotion, creativity, artistic ability and intuition but in a more balanced form. As a person, The Spider is caring, affectionate and empathetic. He is a good listener, diplomatic and easy going. He is the type of older male who will give you sound advice and act as a calming influence in your life. He usually has light hair and has few if any enemies as he is well liked and gets along with the majority of people. He may lack the drive to pursue material wealth as he is more focused on the emotional side of life. He is very family orientated. He may be a water sign such as Cancer, Scorpio or Pisces.

The Spider reversed can represent being overly emotional or too sensitive. It can signify a lack of emotional maturity. It can be a sign that you are lacking back bone or are allowing yourself to be too gullible or putting yourself in a position where others can take advantage of you. You have to be accountable for your own behaviour. It tells you that you need to take responsibility for your emotions and well-being. This minor card can indicate that a lack of emotional balance may be causing you to become overwhelmed, anxious or depressed. This can also present itself as bitterness or unkind, uncaring or manipulative behaviour. As a person, The Spider reversed is manipulative, controlling and, in the extreme negative, abusive. He is someone who uses his ability to sense the emotional weaknesses of others as a weapon against them and will seek to take advantage of vulnerability in others to get his own way or simply for his own amusement. He can be vindictive and spiteful and is not be trusted. Alternatively, The Spider reversed can represent an older male who is so overly emotional and sensitive that he has lost the ability to function properly in the world. He may be moody, sulky, unbalanced and at risk of becoming dependent on the people around him. He may be a water sign such as Cancer, Scorpio or Pisces.