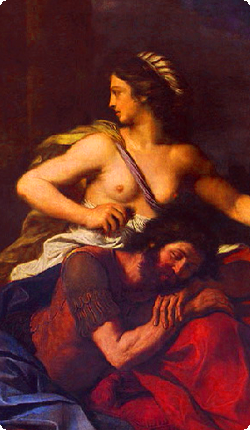 The Bible says that Samson loved Delilah but not that she loved him. They had a sexual relationship but she betrayed him. It has been suggested that she was a prostitute. Modern symbolism suggests that misplaced sexual relationships caused Samson downfall.

Samson and Delilah, the story: While fleeing from the Philistines, Samson fell in love with Delilah. This did not go unnoticed by his enemies, and they promised Delilah a large amount of silver if she could find out where in his great strength lay. He lied to her three times but Delilah did not give up, reminding him that their love vow did not permit secrets. Finally, he told her the truth and revealed the connection between his power and his hair.

Although Delilah’s story centers on her interaction with Samson, she is portrayed as independent from the men around her. She is named without the context of a male relative or spouse, although her real identity remains unclear. It is often assumed that Samsons strength was because of his hair, and that when Delilah cut it, that destroyed his power. The truth is more subtle. Samson’s strength resided not in his hair but in his Nazarite vows. The hair was just an outward symbol. Samson had a reckless record of immoral behavior and Delilah was instrumental in that.