Noted for: Being a symbol of Native American resistance to the US and Mexican military

Personality: A medicine man who was both courageous and humble 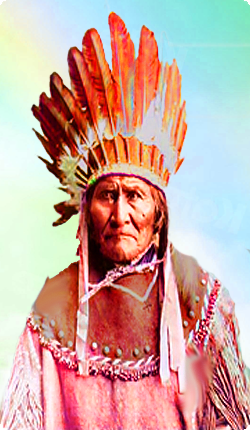 Geronimo was born in what is now Arizona in the upper Gila River country in 1829. His birth name was Goyahkla and his lifelong hatred for anyone who betrayed his people began after Mexican soldiers attacked his tribe and killed his mother, wife and their three children.

Among the Chiricahua, he was better known for his skills as a shaman (medicine man). He was thought to have a variety of supernatural powers including the ability to heal the sick, slow time, avoid bullets, bring on rainstorms and witness events over great distances.

Geronimo embodied the very essence of the Apache values – aggressiveness and courage in the face of difficulty and oppression. While greatly outnumbered, Geronimo fought against both Mexican and American troops becoming famous for his daring exploits and numerous escapes from capture. Later in life Geronimo embraced Christianity, stating: Since my life as a prisoner has begun I have heard the teachings of the white mans religion, and in many respects believe it to be better than the religion of my fathers..