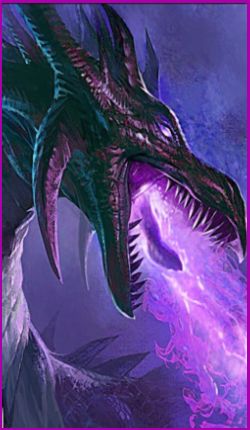 Warning: Sometime The Dragon comes as a warning though rarely as a prediction. It seeks rather to make us look at things we are ignoring or repressing and bring them into the open and deal with them.

Protection: The Dragon may come at a time when we need strength of some sort. Are you feeling under pressure with something? Are you eating healthy and exercising? Do you feel under attack?

Flight: Any animal with wings can suggest flight. This can be a need to run from (or panic about) a situation (or person) but, somewhat differently, a chance to run TO something rather than away.

The Dragon a quick witted person or it can be a call for fire and brimstone wherever it may be needed. That said, it can also be a warning to think before you speak so maybe that should come first.

The Dragon represents delayed news, ideas, planning and inspiration. It can also signify being protective, guarded and vigilant. This minor card may be telling you to be patient, to think before you speak and not to get drawn in unnecessary arguments or conflicts. It can also represent fairness, speaking out and fighting injustice. The Dragon can indicate mental agility, learning or getting an education, being quick-witted, curious and inquisitive and using your head. This card can signify being chatty, communicative, truthful and direct. However, it can also signify being blunt or abrasive or engaging in petty gossip. As a person, The Dragon represents a young person, child or person who is young at heart, who is chatty, lively, quick thinking, analytical, logical and cool and possesses a sharp mind. This person abhors injustice and is a deep thinker but at the same time can come across as blunt, insensitive or a bit of a loner sometimes. In the negative, they can also be a bit of a gossip or deceitful but they do not intentionally cause harm. They like to stick to the rules and may be an air sign such as Aquarius, Gemini or Libra.

The Dragon reversed can represent bad or disappointing news and lack of ideas, planning or inspiration. It can also signify being defensive, cold, vindictive, cynical or sarcastic. This minor card reversed may be telling you to get your head out of the clouds and can represent acting in a scatter-brained or dim-witted manner. It can also represent a lack of fairness, not speaking out against injustice, breaking the law or being a delinquent. The Dragon reversed can suggest that you may have nothing to say or may be lacking in communication skills. It can be a warning to you about the way you communicate with people in your life. You may think you are being truthful and direct but you could be coming across as blunt and abrasive. It can also indicate a lack of education, lack of mental agility or learning difficulties. The Dragon reversed can also signify being a game player, playing mind games, malicious gossip and paranoia. As a person, The Dragon reversed represents a young person who is keeping information to themselves. They are still analytical and logical with a sharp mind. However, they may use their wit for malicious or vindictive purposes. They can be manipulative, cynical and sarcastic and may consider themselves superior to others and that the rules don’t apply to them. They may spread malicious rumours or gossip to intentionally cause trouble.