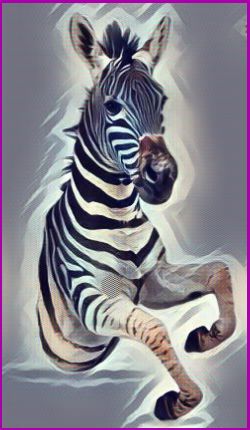 Stability: Often relating to relationships, The Zebra guides us towards strengthening ALL relationships. Have you lost touch with a friend? It can also be a sign of a new job or an improvement in finances.

Black-or-White: The Zebra can represent a person who sees things as right or wrong, no shades of grey or someone very set in their ways. It can also suggest a situation where there is no easy answer.

Camouflage: The Zebra can represent someone hiding their true feelings or a situation where nothing is what it appears to be. It can sometimes suggest someone hiding from or not getting help with depression or anxiety.

Warning: Sometime The Zebra comes as a warning though rarely as a prediction. It seeks rather to make us look at things we are ignoring or repressing and bring them into the open and deal with them.

The Zebra can signify a person around you who will never be a true friend, at least not unless they change their ways! It can also indicate someone gossiping or causing trouble.

The Zebra is not a good omen as it can represent backstabbing betrayal, badmouthing, bitching behind your back, bitterness and enemies. It is a minor card of failure, ruin, collapse, severing ties, goodbyes and the final nail in the coffin of a relationship or situation. It can signify nervous breakdowns, chronic fatigue, exhaustion and being unable to cope. It can also represent hitting rock bottom, hitting a wall or being in a dead end situation. The Zebra can also indicate someone playing the victim or martyr, being overly dramatic, attention seeking or exaggerating. It can also signify violence, attacks and curses.

Reversed Meanings: surviving disaster, being saved, courage, positive energy, worst is yet to come, good health, relapse, things getting better, being beyond help, total ruin, pulling yourself together, learning from past hardships, fears coming true, over the worst, escaping ruin, despair, rising above problems/haters/bitchiness

The Zebra reversed can represent things getting better, getting over the worst, surviving/ being saved from disaster and escaping ruin. It is a reversed card of pulling yourself together and learning from past hardships. It can signify something coming back from the brink of death or failure, Near Death Experiences and Out of Body Experiences. Alternatively, it can signify fears coming true, the worst being yet to come and being beyond help. It can also represent total ruin, despair, relapse and problems coming back.