Noted for: Sharp-shooting, whiskey-swilling and cross-dressing. 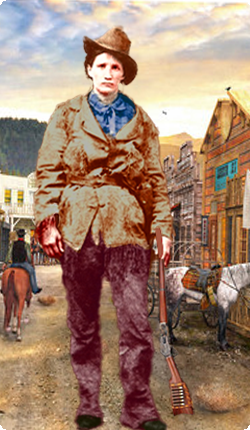 Martha Jane Cannary, better known as Calamity Jane, was a well-known frontierswoman and sharpshooter. She worked as a dishwasher, cook, waitress, dance hall girl, nurse, and ox team driver, until in 1874 she found work as a scout at Fort Russell where she also worked as a prostitute at the Three-Mile Hog Ranch to make ends meet.

In 1873 Captain James Egan allegedly christened her with the nickname Calamity Jane after she saved his life during an Indian campaign in Goose Creek, Wyoming. In 1891 she married Clinton Charley Burke, a hack driver, after living with him for seven years.

In 1901 she appeared at the Pan-American Exposition, a World Fair, in Buffalo, New York but was fired for her erratic behavior and alcoholism. She returned to Deadwood and poverty and was buried there beside Wild Bill Hickok.