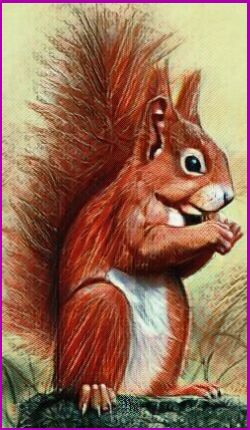 Balance: We often see The Squirrel on 2 legs, symbolizing the balance we have got in our lives (or not). Is there something you are not letting go of? Are you working too hard? Is someone being unreasonable about something? Are you dealing with a breakup or passing?

Fire: The Squirrel is a card about passion and heated situations. It can sometimes signify someone with a hot or explosive temper or a situation about to come to a head.

Health: The Squirrel can be a card about health and fitness. It can suggest a need for will power. Time to stop smoking/drinking? Count the calories? Get to the gym?

Confusion: The Squirrel can represent confusion or hiding from the truth, a situation where we can’t decide what to do or feel we are banging ours heads on a brick wall. The sooner it’s dealt with the better.

The Squirrel can indicate a situation where someone is gathering evidence. For what reason? Can also be a warning not to overdo things. It can also signify letting go of guilt or grief, including sadness over failed relationships.

How many negative emotions can one card represent? Quite a few in the case of The Squirrel! The Squirrel card can represent sadness, loss, loneliness and despair. When this card appears it indicates that you are focusing on the negative. This may be the result of some sort of trauma or unwelcome change you have suffered. As such, this card can signify heartbreak, divorce or separation. The Squirrel also tends to appear if you have suffered a recent bereavement as it represents mourning and grief. It is a card of emotional baggage and instability and can signify that you feel deep remorse, regret, anger, sorrow or disappointment. It is also the minor card of abandonment and can either represent you being abandoned by someone significant to you or you abandoning plans or people in your life. It can also indicate loneliness or isolation. However, for all the negative connotations this card can bring there is a positive message underneath it all, reminding you that no matter how bad things may seem there is always a silver lining, you just have to choose to see it.

The Squirrel card reversed represents acceptance, forgiveness and healing. You have come to terms with your grief and sorrow. You have realised that living the rest of your life in regret, mourning or sadness will not change the past and have accepted that you have to move on with your life. You are beginning to open up your awareness to the opportunities that have been all around you all along. Alternately, the card can also indicate the negative feelings of the upright card being prolonged or dragged out. However, The Squirrel reversed usually signifies that you are ready to begin re-joining the world. You are letting of the past, releasing your negative emotions and emotional baggage. You may also be willing now to accept help from those around with this minor card in your reading. This is a positive step forward as previously you were so caught up in despair that you could not accept the help that was offered to you, which left you feeling lonely and isolated. If you have been bereaved, The Squirrel reversed can signify coming through a period of intense mourning.