Noted for:  The Theory of Relativity 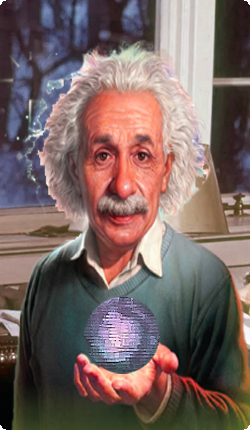 Albert Einstein, 1879 – 1955, was a German-born theoretical physicist, widely acknowledged to be one of the greatest physicists of all time. Einstein is best known for developing the theory of relativity but he also made important contributions to the development of the theory of quantum mechanics. Relativity and quantum mechanics are together the two pillars of modern physics.

After a childhood in Germany and Italy, Einstein studied physics and mathematics at the Federal Polytechnic Academy in Zurich, Switzerland. He became a Swiss citizen and in 1905 was awarded a Ph.D. from the University of Zurich while working at the Swiss patent office in Bern. That year he published five theoretical papers that were to have a profound effect on the development of modern physics.

These papers earned Einstein professorships in Bern, Zurich, and Prague. In 1914 he was appointed director of the Kaiser Wilhelm Institute for Physics in Berlin and offered a professorship at the University of Berlin. Two years later, in 1916, he published his paper on gravitational fields,