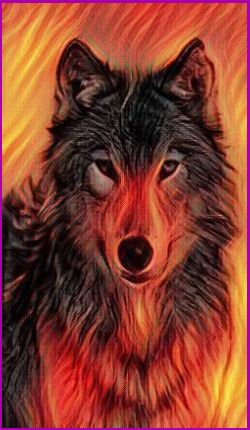 Canine: The canine family can represent a male, you or a person close, or a situation that might traditionally be thought of as a male responsibility. It can sometimes suggest a relationship beginning.

Camouflage: The Wolf can represent someone hiding their true feelings or a situation where nothing is what it appears to be. It can sometimes suggest someone hiding from or not getting help with depression or anxiety.

Spiritual: The Wolf is a card about spirituality, faith or religion. It is usually a good omen and brings inspiration and acknowledgement of blossoming gifts.

The Wolf can indicate a person or situation where we feel badly let down On a brighter note The Wolf can also be a sign of developing intuition and psychic abilities.

The Wolf represents deception, lies, trickery, cheating and lack of conscience. This card also signifies mental manipulation, tactics, scheming, cunning, enemies who masquerade as friends and spies in your camp. It is a minor card of dangerous or risky behaviour, daring, courage and staying ahead of the game. The Wolf can also represent flexibility, adaptability, sharp wit, resourcefulness, being strategic or being overly rational. This card can also signify underhanded behaviour, theft, burglary, fraud, dodgy deals and a general lack of conscience. It represents escaping detection and getting away with something.

The Wolf reversed signifies coming clean and one’s conscience kicking in so if you have done something you are not proud of you may find yourself confessing and turning over a new leaf. It can represent careers in the military or security. Alternatively, this minor card reversed represents pathological liars, serial cheaters, people who are malicious or so two faced they are toxic or dangerous to be around. It also represents slander, blackmail and con artists. The Wolf reversed can also signify ignoring warning signs, being outsmarted or finding that your strategies or plans are unworkable. This card can also be an indicator that you are lacking a backbone, behaving in cowardly manner, stealing credit for other people’s achievements or running away from consequences. It may also represent ignoring warning signs or getting caught.