Noted for: The most famous Pharaoh of all time.

Personality: Little known but thought to have integrity, be religious and appreciative of Egyptian artifacts.. 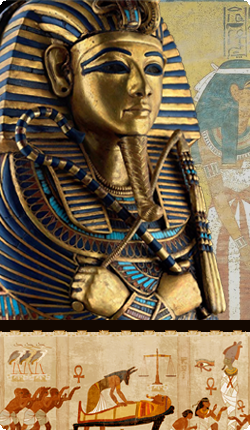 Tutankhamun was born in 1334 BC and he died around 18 years old. The young king began to worship the god Amun who was revered as king of the gods. Tutankhamun unexpectedly died in his 19th year, in all likelihood from a combination of multiple malaria infections and degenerative bone disease.

His rule was notable for reversing the unpopular religious reforms of his father and his tomb held a vast array of artifacts and treasures (to accompany the young king into the afterlife) revealing much about royal life in ancient Egypt.

Tutankhamun parents were brother and sister and his wife, Ankhesenamun, was also his half-sister. Their only two daughters were stillborn.