Noted for: Being Burnt at the Stake

About Joan of Arc: 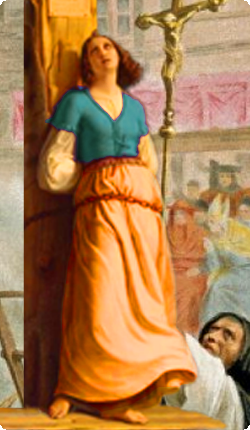 Joan of Arc is the modern-day name of a teenage woman who, driven by voices she heard, fought to drive the English out of France. Born Jehanne Darc in 1412 in the village of Domremy, during the series of conflicts which we now call the Hundred Years War.

Often nicknamed the Maid of Orlean’, Joan was a woman who led uprisings in a time when only men ruled and France was at war with the English. As a devout Christian, she regularly worshipped in her local church and attended services on a weekly basis. She died at age 19 years. After hours of questioning and months of imprisonment, Joan eventually broke down and signed a confession in which she denied ever receiving religious visions.

Contrary to popular belief Joan of Arc was not burned for witchcraft but for being utterly disregarding what is honorable in the female sex, breaking the bounds of modesty and forgetting all female decency. Joan unfortunately met a horrific death after she was captured by the enemy, the Anglo-Burgundians, who sided with the English. On May 30, 1431, Joan of Arc was burned at the stake.