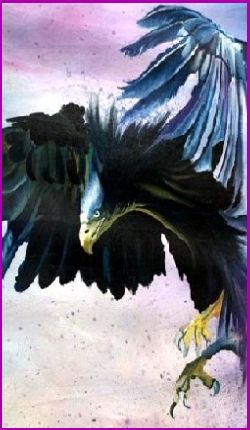 Air: The Eagle may suggest someone whose head is in the clouds or who is full of hot air. On a spiritual level it represents intuition and may be a sign of developing gifts or abilities.

Clarity: A time when things begin to come clear. Can also mean clairvoyance or spiritual enlightenment. Sometimes it warns to look clearly at a person or situation before making any decisions.

Warning: Sometime The Eagle comes as a warning though rarely as a prediction. It seeks rather to make us look at things we are ignoring or repressing and bring them into the open and deal with them.

The Eagle can indicate a person where the message just isn’t getting through or a situation that has blown up out of all proportion.

The Eagle is not always a good omen as it can represent defeat, change surrender and walking away. It is a minor card of self-sabotaging or underhanded behaviour and deception and lack of communication. It can also represent serious conflict, stress and lack of communication. The Eagle card comes with a warning as it can signify hostility, aggression, intimidation and violence and as such it can represent situations we would hope to never encounter in our lives such as crime, theft, bullying, abuse, assault, rape, murder. On the other hand, it may simply represent the action one must take to overcome being challenged by others such as standing up for oneself and fighting back. As such it can be an indication of victory. If so, the victory it represents will be hard won as you will have quite a battle on your hands.

The Eagle reversed can be a good omen as it can signify the peaceful resolution of a situation, ending conflict and moving on. It is a minor card of communication, compromise, overcoming challenges and releasing stress. However, The Eagle card reversed can signify an escalation in serious violence and revenge. It can also signify risking everything, being relentless, not heeding warning signs and surrendering to challenges. It can also represent someone being held accountable for their actions, crimes being uncovered, arrests, regret, remorse, shame and public humiliation.