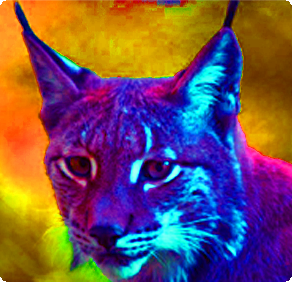 The lynx is a medium-sized wild cat with eyes that glow in the dark. Dreaming of a lynx may symbolize the presence of a quarrelsome or difficult person in your life.

Large Lynx Dream Meaning: . The Lynx has exceptional night vision, remarkable hearing and incredible instincts. The spiritual lesson is an urge for quiet observance, remembering there’s more to the world than whats accessible through the physical eyes and ears alone. If the lynx in the dream is noticeably large this may suggest you are missing the big picture with something.

Bobcats in a Dream: Bobcats are small lynx and inclined to seem less threatening. Seeing a bobcat in a dream may suggest someone is making a mountain out of a molehill.

Lynx appearing in a card reading has more meanings:

The Lynx reversed can represent not learning from the past or not forgiving the past and using it as a stick to beat others around you with. This card can signify that an older or mature female in your life may try to drag you down by spreading malicious gossip about you or being overly critical of you. It can also be an indication that you are feeling dependent on others or not getting the freedom and independence you crave. This card also represents being dysfunctional or infertile or having a cold or absent mother or an evil step-mother. As a person, The Lynx reversed represents a mature female or feminine person who generally is not a nice character as she can be bitter, cruel, cold, unforgiving and pessimistic. She may be an air sign such as Aquarius, Gemini or Libra. She is a woman who may have known loss or trauma herself which she uses as justification to drag others down. She can be spiteful, nasty, vindictive and vengeful. She may lack empathy for others and can be obsessive and controlling. She is someone who may be overly critical or harsh to the people around her and can come across as rude and very negative in reverse. The Lynx reversed may also be a liar, a cheater, disloyal or just generally deceitful.