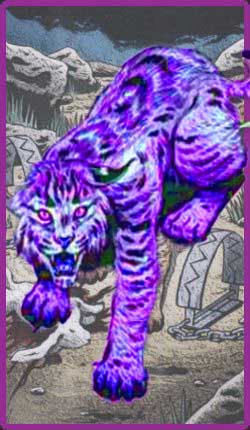 Feline: The cat family can represent a female, you or a person close, or a situation that might traditionally be thought of as a female responsibility. It can sometimes suggest chasing a love that is not returned.

Fire: The Lynx is a card about passion and heated situations. It can sometimes signify someone with a hot or explosive temper or a situation about to come to a head.

Journey: The Lynx can represent literal travel but more often a life path journey. This can be any major life change for the better – better career prospects, a relationship commitment, buying a house, finding your spiritual path, improving your diet.

The Lynx can signify someone wanting their independence or freedom. It can also be a situation where standing on principal won’t solve the problem. Agree to differ?

The Lynx can represent an older woman in your life who will step in when you are vulnerable and protect you or help you to overcome a problem. It represents being intelligent, sharp witted, witty, honest, truthful and candid. This minor card signifies being realistic, discerning or sceptical and it can signify that you will receive constructive criticism from someone and you would do well to listen to it. It can also represent open-mindedness and self-reliance. However, this card can also indicate that you may be suppressing some pain or sadness from past events. As a person, The Lynx represents a mature female or feminine person who is chatty, quirky, forthright and supportive. She may be an air sign such as Aquarius, Gemini or Libra. She is a woman who may have known loss or suffering herself and has gained much inner strength and wisdom from her experiences. She is someone who will always defend those who cannot defend themselves. She has strong empathy and is a great person to have in your corner if you are vulnerable as she will defend you. However, she will not suffer fools gladly and if you are in the wrong, you can expect her to call you out on it without mincing her words! She can have quite a sharp tongue on her at times. She is strong, quick-witted, principled, fair, funny, sophisticated, independent and capable and will not be clingy or needy.

The Lynx reversed can represent not learning from the past or not forgiving the past and using it as a stick to beat others around you with. This card can signify that an older or mature female in your life may try to drag you down by spreading malicious gossip about you or being overly critical of you. It can also be an indication that you are feeling dependent on others or not getting the freedom and independence you crave. This card also represents being dysfunctional or infertile or having a cold or absent mother or an evil step-mother. As a person, The Lynx reversed represents a mature female or feminine person who generally is not a nice character as she can be bitter, cruel, cold, unforgiving and pessimistic. She may be an air sign such as Aquarius, Gemini or Libra. She is a woman who may have known loss or trauma herself which she uses as justification to drag others down. She can be spiteful, nasty, vindictive and vengeful. She may lack empathy for others and can be obsessive and controlling. She is someone who may be overly critical or harsh to the people around her and can come across as rude and very negative in reverse. The Lynx reversed may also be a liar, a cheater, disloyal or just generally deceitful.