Card from our Lifestyle Deck: 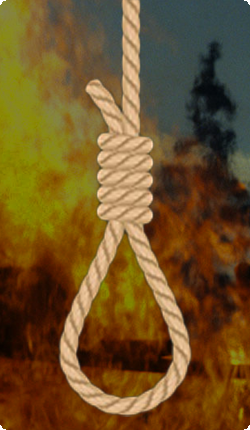 The Noose has more accurate meanings when paired with another card in the lifestyle deck or with a tarot card.

The Noose card is an indicator of conflict, of arguments and aggression. As a symbol, it has a long history of being used as a form of punishment and abuse. Usually, this card will indicate some kind of verbal disagreement – when two different modes of thinking collide. During more heated episodes, arguments can turn personal, meaning that this card can also stand for insults and personal attacks. In rare instances, the Noose card can also stand for abuse of a physical kind too.

The Noose card can also stand for any kind of destructive behavior that is fueled by negativity – sometimes the card exists to show that the motivations behind actions are to simply cause another person pain. This card can be a stand in for the suffering that we receive from others. Taking it a step further, when one undergoes the suffering for so long, we can internalize the messages of the Noose card – it can become a form of self-punishment. We can carry with us deep feelings of shame and guilt, that leads us to a cycle of self-hatred.

Examples of Questions to Ask