Noted for: Her relationships with Julius Caesar and Mark Antony 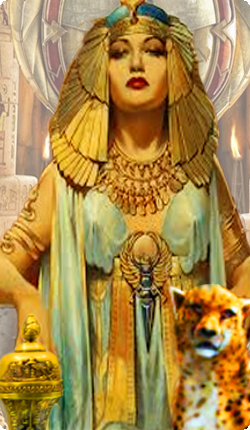 Cleopatra was born in 69 B.C. into a troubled royal dynasty. She could speak various languages and served as the dominant ruler in all three of her co-regencies. Her romantic liaisons and military alliances with the Roman leaders Julius Caesar and Mark Antony, as well as her supposed exotic beauty and powers of seduction, earned her an enduring place in history.

Cleopatra VII, simply called Cleopatra, was the last of a series of rulers called the Ptolemies who ruled ancient Egypt for nearly 300 years. Cleopatra ruled an empire that included Egypt, Cyprus, part of modern-day Libya and other territories in the Middle East.

Cleopatra associated herself with the powerful Egyptian goddess Isis. The famed sister and wife of Osiris and the mother of Horus, Isis presided over motherhood, the afterlife and life cycles. Cleopatra encouraged this association by dressing herself as Isis for ceremonial events and often looked to religious prophecy to justify her actions.