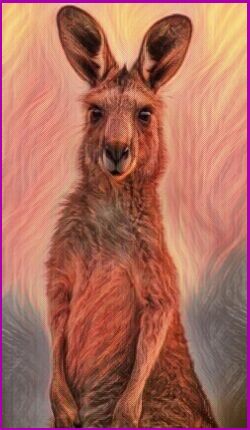 Darkness: The Kangaroo can represent depression or worry and often relates to a person close to us. Sometimes it can suggest dark thoughts such as jealousy or revenge. The card can be a sign of worrying unnecessarily.

Protection: The Kangaroo may come at a time when we need strength of some sort. Are you feeling under pressure with something? Are you eating healthy and exercising? Do you feel under attack?

Health: The Kangaroo can be a card about health and fitness. It can suggest a need for will power. Time to stop smoking/drinking? Count the calories? Get to the gym?

The Kangaroo can signify a female friend or relative or family disagreements. It can indicate a person with depression or bereavement. It can refer to a symbolic death of something close like the loss of a friendship.

The Kangaroo is another of the fear and anxiety cards. Similar to the other fear cards, this card is not an indication of negative events actually happening, just that your fear and anxiety levels are so high they are making you feel that things are worse than they are. In short, you may be making mountains out of molehills. It represents stress, burdens, negative thinking and deep unhappiness. You will be feeling overwhelmed and unable to cope with or face situations, problems or just life in general and may have reached your breaking point. It is a minor card of mental anguish, remorse, guilt, regret, joylessness and despair and you may wish you could go back in time and re-write the past when it appears. It can also signify feeling isolated and being the subject of gossip and it can represent nightmares and insomnia.

The Kangaroo reversed represents seeing the light at the end of the tunnel after dark times. When reversed, it is a minor card of recovering from depression or mental illness or issues improving, letting go of negativity, releasing stress and learning to cope. It signifies opening up, accepting help and facing life. Alternatively, this card can signify a worsening of the issues, depression, problems or fears associated with the upright card. As such, it can represent extreme guilt, remorse, shame, regret, burdens, negative thinking, self-pity, self-loathing or giving up, nervous breakdowns or total collapse. It can be an indication that there is malicious gossip or scandal around you. It can also represent night terrors, hallucinations and psychosis.