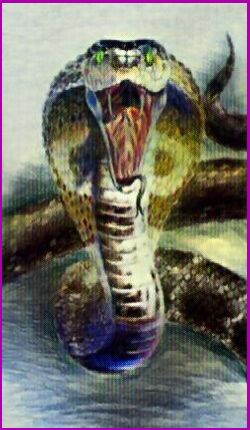 Warning: Sometime The Cobra comes as a warning though rarely as a prediction. It seeks rather to make us look at things we are ignoring or repressing and bring them into the open and deal with them.

Predator: One symbolic interpretation of The Cobra is a situation that is eating you alive. Occasionally it may refer to a person who is chasing you romantically or a rival in love or at work

Barriers: The Cobra can represent obstacles, a person or situation holding us back. Career wise it may be lack of experience or qualifications. In a relationship it is often a communication issue.

Fear: The Cobra can sometimesbe what is called a fear card. This very much depends on how you feel about these animals. If they make you shudder or panic at the thought then look at both reversed and upright meanings.

The Cobra can indicate a person who is afraid to speak their mind or is overthinking something. Can occasionally mean a spiteful person or someone constantly picking arguments.

The Cobra tells you that you are half way through a battle. Recent events have left you drained of all energy and feeling like you can’t go on, but you are so close to getting what you want! You just need to gather the last of your strength and push forward and you will be successful. It represents ongoing battles, being battle weary, drained of energy and fatigued. It also signifies courage, persistence, strength of will, having a backbone, holding out and perseverance. It is a minor card of gathering your strength, learning from past failures, fighting your corner and making your last stand. You may be wounded, guarded or expecting trouble when it appears in your reading. It can suggest that things have not worked out the way you planned and there have been challenges and setbacks along the way. The Cobra also tells you that you are close to success or nearly there.

The Cobra reversed represents refusing to compromise or give in, being stubborn, rigid or obstinate. It can signify being the last one standing or having a chip on your shoulder. Alternatively, this minor card reversed can signify a stalemate, withdrawal, retreat, giving up, having no fight left or no backbone. The Cobra reversed can also indicate weakness of will, chronic fatigue and lack of courage, persistence or perseverance. It can represent not learning from past mistakes or falling at the final hurdle. This card can signify dropping your guard or encountering unexpected trouble.