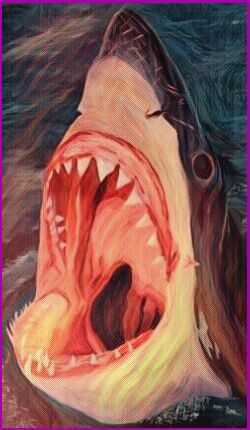 Predator: One symbolic interpretation of The Shark is a situation that is eating you alive. Occasionally it may refer to a person who is chasing you romantically or a rival in love or at work

Water: With ties to water, it suggests the ebb and flow of daily life. Lovers, think about who is giving and who is taking. Occasionally it can symbolize a feeling of drowning, that everything is overwhelming.

Camouflage: The Shark can represent someone hiding their true feelings or a situation where nothing is what it appears to be. It can sometimes suggest someone hiding from or not getting help with depression or anxiety.

Fear: The Shark can sometimesbe what is called a fear card. This very much depends on how you feel about these animals. If they make you shudder or panic at the thought then look at both reversed and upright meanings.

The Shark can indicate a person or situation that is going round in circles. It can also suggest someone close who doesn’t know what they want or a situation that unexpectedly takes a turn for the worse but you dont know why.

The Shark represents structure, routine, self-discipline, power authority. It is a minor card of being methodical, using your head, mind over matter and the head over the heart. This card signifies logic and reason, integrity, ethics and morals. The Shark can represent legal matters, law enforcement, military, police and judges. As a person, The Shark is a mature male who is cool, self-disciplined, intelligent, honest and strong. He is rational, logical and a deep thinker. He may be an air sign such as Aquarius, Gemini or Libra. He does not like to publicly display his emotions and prefers to use his intellect over his emotions to deal with situations. He is a great conversationalist and fiercely loyal and protective of his loved ones. He does well in structured environments and needs to have a routine to operate at his best. He can be clinical and stern. In the extreme negative, he can be a bully or a tyrant and he can be cold or distant if someone is too irrational for his liking. But generally he is analytical and fair-minded. He takes his responsibilities seriously, is dependable and plays by the rules.

The Shark reversed can represent lack of structure, routine, self-discipline, power or authority. When reversed it is a minor card of not using your head or losing your cool. Alternatively, it can represent being power hungry, inhumane or a tyrant. This card reversed signifies a lack of logic, reason, integrity, ethics or morals. The Shark reversed can also indicate legal matters not going in your favour. As a person, The Shark reversed is a mature male who can be cold, power hungry, controlling, cynical, sarcastic and ruthless. He may be an air sign such as Aquarius, Gemini or Libra. He can be oppressive, judgmental, aggressive, abusive, violent and brutal. This card reversed can represent someone who is intelligent and talkative but uses these qualities for negative means such as to manipulate or hurt others. Alternatively, he can be irrational, illogical, dim-witted, weak and a poor communicator.