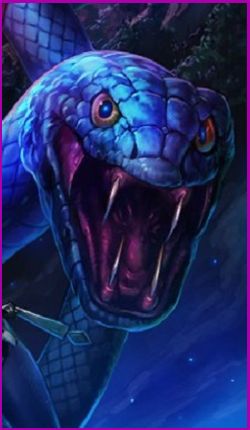 The Serpent in general, is said to be about betrayal and deception. When you get this card, it may imply that you or someone else in your life is having difficulty getting away with something. There are instances when we are forced to be sneaky, hoping that we will not be discovered. When we are found out, we have to face the consequences – whether it’s embarrassment, punishment, or worse. Sometimes this happens when there are instances when you had to think on your feet and did something that was somewhat shrewd and out of character. Now there is a danger of the secret coming out.

The Serpent reversed can have multiple meanings depending on the context of the other cards within the reading. It can suggest firstly a need to change your approach – the tactics you’ve been using are not working. While upright, this card can stand for a cunning victory attained by deception and trickery, the reversal can stand for either a more extreme version of such behavior. Or instead, a kind of renewal of conscience. You or someone in your circle may be deciding to unburden themselves with their guilt and come clean about some piece of manipulation they have been involved in. Trust has been broken, but with a confession, you may be on the road to repairing it. There is a desire here to try and do things in a different way, one that is collaborative rather than independent.