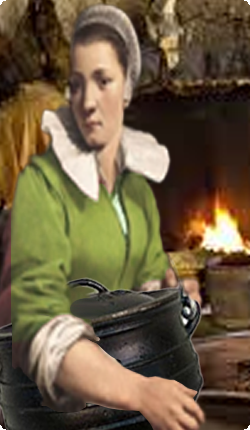 The female Cook was often considered the queen of the household. A woman of great perception and insight who ruled the kitchen and often the servants with an iron hand. It’s a hard thing to pull the wool over the eyes of somebody like this – they will look beyond the face we present and see to the very core of our being. That’s one reason why the cook was often a woman who stirs deep and complex reactions in the people who come into contact with her. They can feel uneasy, discomforted and awkward when being observed by her.

Try to remind yourself to study the interactions you have with others. Don’t just deal with the face value. Struggle to seek behind that mask for the whole being beyond. Recognize yourself when you take up a mask. Know that at this moment you are acting like (for instance) a working person doing their job, or a family member loving the family, or a person alone and taking a bath. Look hard at yourself. You take up roles. Try and identify them clearly. Examine the way that you feel differently in each situation. And recognize that though each of those roles is an expression of you, not one single one of them IS you. Then take that realization beyond you into the world.

A good cook was generally regarded as an important member of society, often feared by her underlings. Before the days of housekeepers, the head cook would be responsible for the kitchen staff and in noble or royal courts this could be dozens more, bakers, sauciers, larderers, butchers, carvers, page boys, milkmaids, butlers and scullery maids. She was highly organized, worked long hours and knew everything that was going on in the household. In order to maintain her status, a female cook had to stay one step ahead of the men employed in more menial jobs and was often despised because of the power she held over them.

At the start of the middle ages, most cooks were slaves but towards the end of the age, women began to take an influential role. However until they reached the highest levels, life was like it is for most cooks today – hard and unrelenting.

An upright card denotes an ability to control situations and keep many balls in the air but watch out for where this turns to manipulation and controlling behavior, a trait often found in cooks of bygone ages

An upright card denotes an ability to control situations and keep many balls in the air but watch out for where this turns to manipulation and controlling behavior, a trait often found in cooks of bygone ages